To date, there has been little research into the causes of, and solutions to, loneliness among migrant and ethnic minority people.

The objectives were to synthesise available evidence and produce new insights relating to initiatives that aim to address loneliness among these populations, plus the logic, functioning and effects of such initiatives.

Guided by ‘systems thinking’, a theory-driven synthesis was combined with an effectiveness review to integrate evidence on the nature and causes of loneliness, interventional types and programme theory, and intervention implementation and effectiveness.

The theory review indicated that common conceptualisations of ‘loneliness’ can be usefully extended to recognise four proximate determinants when focusing on migrant and ethnic minority populations: positive social ties and interactions, negative social ties and interactions, self-worth, and appraisal of existing ties. A total of 170 interventions were included. A typology of eight interventions was developed. Detailed logic models were developed for three common types of intervention: befriending, shared-identity social support groups and intercultural encounters. The models for the first two types were generally well supported by empirical data; the third was more tentative. Evaluation of intervention processes and outcomes was limited by study content and quality. Evidence from 19 qualitative and six quantitative studies suggested that social support groups have a positive impact on dimensions of loneliness for participants. Evidence from nine qualitative and three quantitative studies suggested that befriending can have positive impacts on loneliness. However, inconsistent achievements of the befriending model meant that some initiatives were ineffective. Few studies on intercultural encounters reported relevant outcomes, although four provided some qualitative evidence and three provided quantitative evidence of improvement. Looking across intervention types, evidence suggests that initiatives targeting the proximate determinants – particularly boosting self-worth – are more effective than those that do not. No evidence was available on the long-term effects of any initiatives. UK intervention (n = 41) and non-intervention (n = 65) studies, together with consultation panel workshop data, contributed to a narrative synthesis of system processes. Interlocking factors operating at individual, family, community, organisational and wider societal levels increase risk of loneliness, and undermine access to, and the impact of, interventions. Racism operates in various ways throughout the system to increase risk of loneliness.

There was a lack of high-quality quantitative studies, and there were no studies with longer-term follow-up. UK evidence was very limited. Studies addressing upstream determinants operating at the community and societal levels did not link through to individual outcome measures. Some elements of the search approach may mean that relevant literature was overlooked.

Theory regarding the causes of loneliness, and functioning of interventions, among migrant and ethnic minority populations was usefully developed. Evidence of positive impact on loneliness was strongest for shared-identity social support groups. Quantitative evidence was inadequate. The UK evidence base was extremely limited.

UK research in this area is desperately needed. Co-production of interventional approaches with migrant and ethnic minority people and evaluation of existing community-based initiatives are priorities. 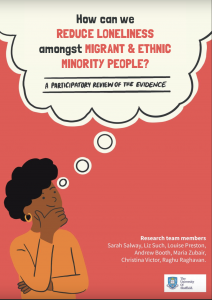