A project showcasing the impact inclusive music making can have even within the most challenging of times. January – June 2021

As part of the opening event for the Culture, Health and Wellbeing International Conference on 21st June 2021, we were excited to premiere a new AHSW commission – Cap O’Rushes by British award-winning Composer, Cevanne Horrocks-Hopayian.

Based on the story of Cap O’Rushes a rare version of a folktale from Suffolk, AHSW and Cevanne worked with three inclusive ensembles BSO Resound, Ensemble Juvenil de Setúbal, and HeadSpace Ensemble to bring her composition to life. Created in lockdown, this premiere provides a timely and extraordinary audio and visual reflection of one daughter’s journey towards reconciliation.

Set within a contemporary backdrop, social themes of power, identity and personal growth are explored through a heroine’s strategy to resolve a family crisis. Within the framework of three ‘movements’ or ‘acts’ reflecting POWER | EXILE | RECONCILE, each ensemble explored one compositional movement, and through the course of these movements the music charts the narrative’s transition from exile to reunion with brass, strings, percussion and electronic instruments.

Inspired by gestures, sounds, and imagery of the Cap O’Rushes story, the composition was visually woven together with dance and film footage from UNIT, a collaborative duo consisting of a Choreographer and Film Director.

Filmed individually and in line with Coronavirus restrictions in the UK and Portugal, the project offered a space for collaboration and creative practice, as well as showcasing the impact inclusive music making can have even within the most challenging of times.

Premiered on 21st June, the digital premiere performance of Cap O’Rushes was a wonderful and inspirational opening to the conference, affirming the power of the arts to connect people across cultures and celebrating and showcasing inclusive approaches to working with people with disabilities to co-create work of a high artistic standard. The premiere supported the 1st day of the International Conference which focused on the role of arts and culture in relation to inequality; community development; global public health and responses to the pandemic; prevention and everyday creativity. The premiere of the composition was also enjoyed on the same day by Make Music Day in celebration of World Music Day.

The Cap O’Rushes production was made possible with support by Stichting Horizon. 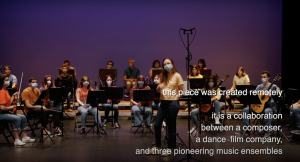 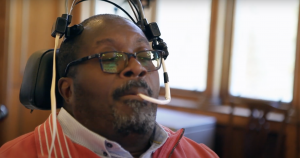 The Cap O’Rushes production was made possible with support by Stichting Horizon.

Cevanne Horrocks-Hopayian is an award-winning composer of chamber, orchestral, electro-acoustic, vocal and theatre works. She gave her first solo BBC Proms performance live for Radio 3 last year. Her work was double-nominated for the 2017 British Composer Awards, winning with ‘Muted Lines’. Cevanne performs with her voice, electronics, and lever harp, often with custom-built midi-controllers such as the Sonic Bonnet. Her debut album BRACE was shortlisted for a British Composer Award in 2018. She has also written for Clarence Adoo, and his assistive technology ‘Headspace’. Cevanne also builds tactile ‘eye-music’ scores where art dictates the composition, often by cutting holes into paper to reveal new notes, texts and context beneath.

Tessa’s work is focused at the intersect of arts, health & business. After graduating from the Royal Academy of Music, she founded ‘ Music in Offices’ to bring the wellbeing benefits of music making to a wider audience. Tessa then co-founded the Investec International Music Festival which she directed for the next 10 years. She has since worked as a consultant across a range of cultural projects, including more recently for KPMG.

Tessa coordinated the Health & Wellbeing Symposium for the Setúbal Music Festival, and subsequently became Artistic Director of the Festival for the 2020 Edition.

BSO Resound is a professional disabled-led ensemble that forms a core part of Bournemouth Symphony Orchestra. In 2019, the six-piece chamber group won the Royal Philharmonic Society Impact Award for its part in improving opportunities for disabled musicians. BSO Resound also made a high-profile debut at the 2018 BBC Proms as the first disabled-led group to perform in the festival’s illustrious 125-year history.

The ensemble was formed in 2005 after a virtual instrument called Head=Space was invented by Rolf Gehlhaar and which enabled Clarence Adoo to engage with fellow performers at the highest professional level. Clarence is a professional trumpet player, but in 1995 he had a tragic car accident which left him paralysed from the neck down and unable to continue his full time professional career in music. Clarence now uses Hi-Note – a computer-based virtual instrument controlled by his breath and assisted by his head movements. Inspired by the Head=Space instrument, the name was used by John Kenny for a titled ‘HeadSpace’ composition for a group who would then go on to become the HeadSpace Ensemble. An innovative and highly-skilled ensemble, HeadSpace is leading the way in inclusive ensembles.

Ensemble Juvenil de Setúbal (EJS) has 12 ensemble members and is a mix of young people with special needs, young people in classical music training and percussionists. Founded in 2014, and born out of the socially inclusive Setubal Music Festival, in partnership with the Municipality of Setubal, the purpose of the Youth Ensemble, mirroring that of the Festival, was to become, “…the very first ‘orchestra’ that genuinely gets rid of cultural and social barriers, which often stand between people of different backgrounds and music of different genres, in the pursuit of artistic quality as well as equality.” Ian Ritchie, former Artistic Director.

This year, the Artistic Direction was handed over to a Portuguese talented young Maestro, Miguel Conceição, carrying on the mission to bring together young people from different social and cultural backgrounds, including those with special needs who are now learning to play music using assistive technology. EJS’s pioneering work has been showcase at House of Lords as part of the All Party Parliamentary Group for Arts, Health and Wellbeing, and their work with HHT’s London Symphony Orchestra/Panufnik composers scheme has been so successful it has seen some of their members going on to study music or music therapy in Europe at top conservatoires.

UNIT creates dance performances, projects and films that bring people together, revealing personal stories and the communities that connect them. A collaboration between Choreographer, Tom Hobden and Film Director, Kate Flurrie, UNIT offers bespoke projects reflecting the diverse nature of community and society through dance. Showcasing different ages, abilities and experiences, UNIT is constantly seeking to push the innovative boundaries of movement.

Alex Bonney is a trumpeter, electronic musician and recording/mix engineer and producer based in London. When not performing Alex works with a variety of artists producing and engineering music for leading jazz, improvised and contemporary music record labels.