When I was in Japan I went to a dance workshop with Natsu Nakajima. The workshop was for people with a learning disability and we created our own dance movements and learnt various relaxation and massage techniques.

It was the first time I had met Natsu, who is the last of a generation of dancers taught by the founder of Butoh, Hijikata Tatsumi. Natsu was born in 1943 and holds in her memory the intense experience of Hijikata’s training, but her work has continued to evolve through each of the ‘seasons of her life’, as she describes it.

While in Japan I wanted to find out about the older artist in that society. I can’t make any generalisations on the subject, but I can write about Natsu a little. I asked her about being an older artist and she said that Hijikata once told her she should ‘dance time’. She said that this had finally happened in a recent performance in Tokyo, and that it had only been possible with the limitations of an aging body.

My daughter has been living in Tokyo and working at the Hijikata Archive so I asked her to explain a bit more about his philosophy. She said that Hijikata explored the limitations of the body when discovering new movement, creating choreography by entering the sensations of a blind person or the physical state of someone bedridden with fever. He expanded the possibility of the physical body by dissolving self and moving towards another being. 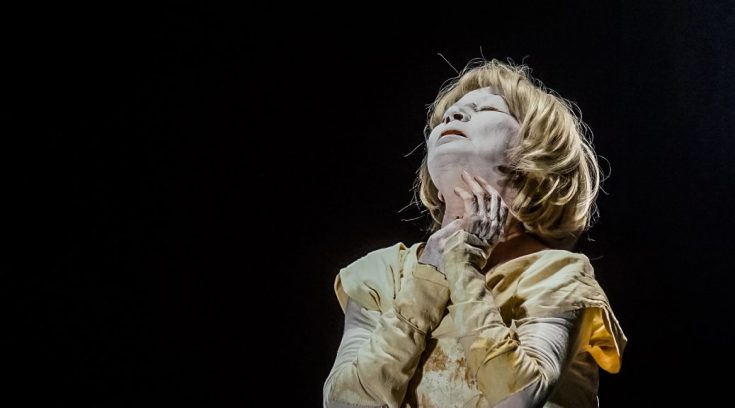 Natsu gave a performance at the South Bank University on May 30th. The performance is called Like Smoke, Like Ash. It was in memory of Lizzie Slater who was one of the first promoters of Natsu’s work and arranged for her to perform in the second LIFT festival in 1983. Subsequently Natsu performed and choreographed internationally and lived for some years in New York. She returned to Japan 20 years ago, in part to develop dance with people with disabilities, inspired by Wolfgang Stange who she met and worked with in London.

In the Q&A after her performance she talked about how her dance has changed over her long life as a performer. We saw a film of the 1983 LIFT performance, ‘Niwa’. There is no sense that as Natsu gets older she cannot dance in the way that she used to, but rather that the body is able to explore different possibilities and movements at different times in its life. Butoh is associated with older dancers because the other founder of the movement, Kazuo Ohno, continued to perform into his 90s. Butoh dancers rarely retire but believe that their dance should continue to evolve and re-create itself to the end of life.

Like Smoke, Like Ash is elemental. Natsu says that Hijikata would often tell his disciples to become ‘disappearing things, appearing things.’ ‘Disappearance’, for him, meant more than simple self-erasure; it was pregnant with the possibility of ‘new birth’. She says: Now, after a lifetime of dancing, I want to ask: what can be communicated, and what ‘new life’ can be found? It is the ‘life’ of a firework in the night. It is the fleeting message from a past world to a new one. After it dies out, there will be the sweet passing of a flower to those who have already left us.

The performance was full of ash, whiteness, spangled light and the opening up and exploration of light and movement. It took us into a place of disintegration and pre-birth. It was playful and sadly moving. To me, after my recent visit to the eerie post-tsunami wastelands, it was about the elements and annihilation, re-birth out of earth and ash and a bleak but hopeful world. For my son, next to me, it was about the birth and re-growth of nature in a world of climate change and species loss. As with all powerful artistic experiences it took us into a poetic space where our imagination was free.